Did you feel like there was something missing in your aca-festival announcement feed? Not to worry – ACF 2013 is here to remedy that!

Get your sharpie out and circle / star / put hearts around October 12th, 2013. Plan to be back inside Logan Arts Center at the University of Chicago for one amazing day filled with workshops, master classes, and performance opportunities to get your group’s year kicked off with a bang. The whole festival will be focused on making your year an incredible one. Whether you want to put out a great album, go on tour, win a major competition, or tackle new ground, ACF will offer the know-how and resources to help you get there. From setting goals to learning how to accomplish them, you’ll look back at the end of the school year knowing that attending ACappellaFest was the best investment for your group.

This year, ACF is proud to welcome Lindsey McGowen as your 2013 Executive Producer. Lindsey originally hails from the great city of Chicago, and started her a cappella career in high school as a founding member of Solace, at Glenbrook South High School in 1999. She went on to found Solstice, at Case Western Reserve University, and upon moving to Detroit in 2006, founded two CAL groups: Two Weeks Notice, and The Seekers. Lindsey is an avid arranger, an ICCA & ICHSA judge and producer, has a penchant for seeing songs in color, and a special place in her heart for lady-a cappella. Professionally, she is a Business Analyst in the software industry, and in her spare time enjoys all things related to Japan, vintage jazz dances, and being a giant nerd. 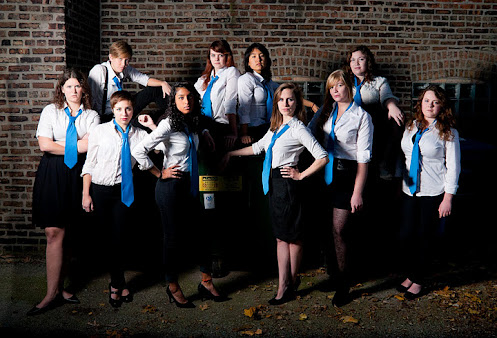 Men in Drag (no men, occasional drag) is back as your 2013 ACF host group. MiD’s members embrace all that their name implies, challenging gender conventions, bringing sass, brass, and class to the all-female a cappella genre, and holding themselves to a high standard of modern musical entertainment. Whether rocking it out in ties, high heels, or both, Men in Drag is always ready to shake things up. They’ve won CARAs, been featured on Voices Only, competed at CASA festivals, and are stoked to be back for ACF 2013. You should probably go ahead and watch all of their videos, like them on Facebook and follow them on Twitter.

Headlining performing groups will be announced soon, as will ticket information! Keep an eye on those feeds for more.

See you in the Windy City.